Want to help Marty Out?

If you want to get Marty paid, with very little effort on your part, here's all you have to do!

(No Audio, it's just pictures!)

"The Bat Story will be his comic legacy. Marty's stories were so brilliant that I made my mom and dad bring my 15-year-old son from two hours away to see him perform."
- Jon Reep - Last Comic Standing - Winner

"Marty was a huge help in making our Valentine’s Dinner event a great success! I don’t know how often you hear professionalism and comedian in the same sentence but his willingness and ability to deliver a show perfectly suited to our crowd, and the continuous roar of laughter clearly demonstrated he is a professional of the highest caliber. Given the opportunity, everyone involved in planning our event would not hesitate to recommend Marty to any other church group needing a good laugh … or any other group for that matter."
- Ron Hoppe - Lake Norman Baptist Church
- Lake Norman, North Carolina
REad All Reviews

A Little About Marty 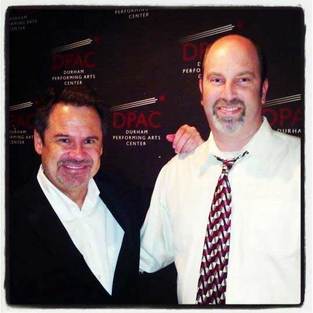 Marty Simpson doesn’t look like an All-American Football Player, a sports radio talk show host, or a national touring comedian. Let’s be honest, he looks like Dr. Phil's heavier brother.  Yet, he’s all of these things.

He also doesn't look like he would have an amazingly beautiful wife which he's been happily married to for over 20 years, but that's true too!  Marty's comedy is rooted in his life experiences which include antics with his wife, children and golden doodles, as well as well as the occasional sports story. (But keep in mind, when Marty played football, he wasn't a real player, he was just the kicker!)

Plus, Marty is a stand up comedian who has quickly garnered national recognition after becoming the winner of the 2012 Clean Comedy Challenge.
Since that time, you may have seen Marty opening for Saturday Night Live’s Dennis Miller (if you were at that one show, that one night), Tim Hawkins, Pauly Shore, and Last Comic Standing Winners, Jon Reep and John Heffron. Marty also was a featured performer recently at the Lifeway Main Event along side Dr. Tony Evans, The Kendrick Brothers, All-Pro Place-Kicker David Akers, and Coach Tommy Bowden.

Marty stays busy at live stand-up shows throughout North America and has performed in venues from the 3 thousand seat Durham Performing Arts Center, all the way to Los Angeles’ Flappers Comedy Club. Marty has been a featured performer on Tim Hawkins’ Rockshow Comedy Tour and has performed for hundreds of churches across America and Canada.

Marty’s fun loving, self-deprecating comedy is focused on his experiences as a husband, dad, and former high school coach and teacher. He’s a perfect fit for…