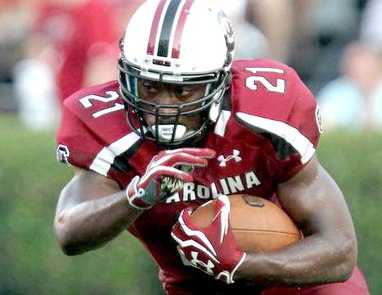 Thank You, Marcus Lattimore February 3rd, 2010 is the day the Gamecock football program changed forever for the better. Many fans believe the red letter day for South Carolina was the day Coach Spurrier took the head coaching job, but it was actually a few years later when the real change happened. Coach Spurier has certainly been one of the driving forces for the upswing of Gamecock football, but history will look back to that winter day in 2010, when a young Marcus Lattimore put on that Gamecock baseball cap and announced he was going to be a Gamecock.

No other player has had the impact of Marcus Lattimore. In the movie Remember the Titans, Julius tells Gary that attitude reflects leadership. The day Marcus Lattimore stepped on campus this became obvious for the Gamecocks. I've heard from someone close to the program that Marcus Lattimore would show up at 5:45 a.m. and run the punishment with his teammates who missed breakfast check or study hall. Sometimes this punishment included running the entire Williams Brice stadium steps. At one of the punishments a teammate of Lattimore's looked at Marcus and said,

"You didn't miss anything, why are you here?"

In all my years of playing, coaching, or watching athletics, I cannot think of a better example of leadership. (Or a better explanation of why Lattimore was capable of 40 carries in an SEC football game!) Marcus Lattimore is the single most influential force in South Carolina football history.

Lattimore led the Gamecock football nation out of a century of mediocrity. But like Moses, for reasons hard to comprehend, Lattimore himself may not actually be able to enter the Promised Land with the rest of his team. Gamecocks have certainly wandered in the desert for more than 40 years, but behind the unbelievable leadership of Lattimore have gotten to the door step of the Promised Land. As cliche and common as this sounds for a Gamecock fan to say, next year's schedule and returning roster lends itself to big things.

At the time of the publishing of this article, no official report has been given to the severity of Lattimore's injury, so it is not possible to conclude what the future holds for him. All I know is, he was the back bone of the largest culture change in college football history. South Carolina went from being a bottom dweller cast aside by the national media to being a yearly top ten program, all on the coat tails of the leadership of Marcus Lattimore.

He is also like Obi-Wan Kenobi from Star Wars. Obi-Wan delivers a famous line near the end of Star Wars, which is paraphrased as,

"If you strike me down I shall become more powerful than you can possibly imagine."

I truly believe Marcus Lattimore's leadership is so powerful that it could prove to be more potently effective to the current team and future teams if he is somehow not able to play.

The future of the Gamecock football program was strengthened the day Marcus Lattimore decided to play for the university. It may be part of the larger master plan for this young man to strengthen the program even more by not being able to play. I believe he will provide a lasting foundation at the university by inspiring a generation of young players to actually stay home and play for the Gamecocks.

There are young boys all over the state of South Carolina who woke up this morning hearing stories about Marcus Lattimore. They are all hoping to one day make an impact on Gamecock football just like Marcus has and just like he will.

I pray that Marcus is able to play again and play fantastically. But if he's not, I want him to know what he has meant to this Gamecock fan. His leadership has been second to none. He has helped the Gamecock football program rise from the ashes like the phoenix. He has made every kid in South Carolina playing backyard football who has ever had fleeting thoughts about the Gamecock football program to conclude immediately that they want to go to South Carolina.

While Marcus may not actually get to enter the Promised Land when the Gamecocks go there, I want Marcus to truly realize, that every Gamecock fan across the world knows that it was his hand we held as he pulled us, it was his heart that guided us, and it was his feet that took us there. Every player and every fan simply followed their leader, Marcus Lattimore, to the door step of the Promised Land. We will be forever grateful.

February 3rd, 2010, Lattimore committed to South Carolina and changed the program forever. October 27th, 2012, Lattimore was stricken down by this awful injury. October 28th, 2012, I began looking forward to watching Lattimore become "more powerful than I can possibly imagine."

It is with a prayerful heart, and a joyful spirit that I sincerely say thank you to Marcus Lattimore for all he's done for the Gamecocks. I am currently looking forward to fighting the lump in my throat while watching an ESPN, 30 for 30 production 12 years from now recapping all the influence Marcus Lattimore had during his time at South Carolina and in the NFL.

I believe we as Gamecock fans should randomly show up during Lattimore's rehab workouts and cheer for him. When he says,

"You don't need rehab, why are you here?"

[ I invite you to leave any message for Marcus telling him what his leadership has meant to you over the years by posting a comment here. ]