Marty started 44 games for the USC Gamecocks from 1991-1995. He was the leading scorer in 1992 while making 12 field goals that season (including a 50 yarder and two 46 yarders.) He also handled all punting and kick-off duties in the 1992 campaign, downing 28 punts inside the 20 yard line while having zero touchbacks recorded. He kicked off into the endzone for touchbacks a dozen times as well. He recorded the fourth longest punt in school history with a 79 yarder versus Vanderbilt.

Marty is also the answer to a great trivia question. That question is, "Who scored the first six points for USC after entering the S.E.C.?" Answer: Marty Simpson versus Georgia in 1992. The Gamecocks would take the lead 6 to zero on a pair of Simpson field goals, only to go on to lose that game 28 to 6. 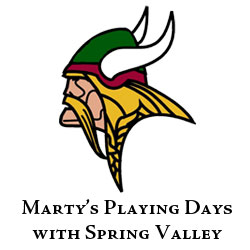 Marty set state records for distance in 1988 and 1989 with a 57 yard field goal and 61 yard field goal respectively. He also kicked the game winning field goal in the 1988 AAAA State Championship versus Gaffney.

At one point in Marty's High School career, he became the only kicker in state history to simultaneously hold the state record for distance on field goals and extra-points in a row, with 55 over three seasons.

Radio Call of 57 Yard FG
This is the WVOC 560 radio call of the first time Marty tied the state record with a 57 yard field goal in 1988 (25 years ago!) We haven't verified this yet, but we believe the two voices in this call are current radio broadcasters, Mick Mixon and Jim Powell.

Jim Powell is currently the voice of the Atlanta Braves, and Mick Mixon is the voice of the Carolina Panthers.
You can tell they are future big-time radio guys with how entertaining they make this call. Enjoy.